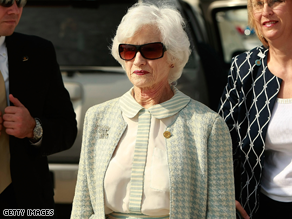 «(CNN) – The mother of U.S. Senator and former presidential candidate John McCain is hospitalized in Lisbon, Portugal, after injuring her head in a fall, McCain's spokeswoman said Friday.

Roberta McCain, 97, was visiting Lisbon as a tourist when she fainted and hurt her head, spokeswoman Brooke Buchanan said.

McCain is stable and will be held for observation, Dr. Fatima Palmero of the Sao Jose Hospital told CNN. It is not clear when McCain might leave the hospital, Palermo said.

The senator has spoken to his mother and the doctors treating her, who report that she is recovering well, Buchanan said.

Portuguese TV station TVI24 reported that the elder McCain was taken to the hospital Tuesday afternoon after falling in a street in downtown Lisbon. She was found lying on the ground and had hurt her head and face, the station reported.

– CNN's Dana Bash in Washington and Andreia De Oliveira in London, England, contributed to this report.»