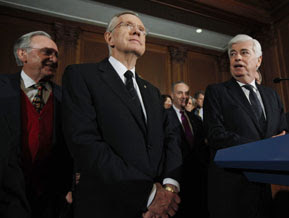 «After months of blown deadlines and political near-death experiences, a sweeping health care reform bill cleared the Senate Thursday on a party-line vote, putting President Barack Obama within reach of a domestic policy achievement that has eluded Democrats for decades.


With Vice President Joe Biden presiding over the session, Democrats gathered in the chamber before sunrise on the day before Christmas to cast a vote long in coming but in the end, hardly a surprise, a 60-39 tally that was the fourth time in as many days that Democrats proved they could muster the winning margin.


But this was the one that counted, the bookend to a House vote last month that puts Congress on record saying that Americans have a right to affordable health insurance, with plans that will cover 30 million Americans currently without it.


“With today’s vote, we are now incredibly close to making health insurance reform a reality in this country,” President Barack Obama said at the White House, calling the bill the important piece of social legislation since Social Security in the 1930s. “Our challenge, then, is to finish the job.”


Senate Majority Leader Harry Reid (D-Nev.) said before the vote that Americans could wait no more. “How much longer can we afford to put this off, or ask the uninsured for their patience?” Reid said. “We may not completely cure this crisis today or tomorrow, but we must start toward that end. We must strive for progress.”


But clearly exhausted, Reid mistakenly voted no when the roll call came to him. Reid shook his head, changed his vote to "aye" – and rested his head on his desk briefly. The chamber erupted in laughter.


"I spent a very restless night last night trying to figure out how I could show some bipartisanship and I think I was able to accomplish that for a few minutes," Reid joked later.


The vote sets the stage for difficult House-Senate negotiations during which Democrats will be forced to settle differences that have lingered for months, and there is still no guarantee a bill will pass in the end.


Sen. Joe Lieberman (I-Conn.), one of the last Democratic holdouts, once again made clear that his vote isn’t assured when the bill returns to the Senate. In the hallway outside the vote, he told his fellow moderate, Sen. Ben Nelson (D-Neb.), “Our work is not over.”


Moments after the historic vote, Nelson returned to the Senate floor, to reassert his call for strong language in the bill that prevents federal funding of abortion, another likely sticking point in the upcoming negotiations.


Republicans, too, say their work isn’t finished. “This fight isn’t over. My colleagues and I will work to stop this bill from becoming law. That’s the clear will of the American people — and we’re going to continue to fight on their behalf,” Senate Republican leader Mitch McConnell (R-Ky.) said.

But with momentum at their back, Democrats believe they can craft a compromise that, in broad strokes, would expand coverage through subsidies to help Americans buy insurance and allowing more people into the Medicaid program. The Senate plan includes a new national health insurance program overseen by the government but offered through private insurers.

Both the House and Senate bills prevent insurance companies from dropping patients who get sick and create a new legal requirement that all Americans must own health insurance – a provision already under growing attack from conservatives and liberals.

For a day at least, however, Democrats basked in the moment.


When Sen. Robert Byrd’s name was called, the ailing West Virginian said, “Mr. President, this is for my friend, Ted Kennedy – aye," a reference to the late Massachusetts senator who long fought for universal health care.


Kennedy’s wife, Victoria Kennedy, attended this vote, as she did early Monday morning. Tears in her eyes, she was emotional after the vote. "This is an enormous step for our country," she told reporters off the Senate floor. "We have some steps to go. But we have come too far. We're not going to let this opportunity slip away"


Sen. Bernie Sanders (I-Vt.) was the last vote, entering the chamber late to a round of applause, and he yelled out "yes."


The visitor's gallery was filled with staff that worked on the bill, as well as the longest-serving House member in history, John Dingell, whose father fought for universal health care. Following the vote, the usually stoic Reid broke into a broad smile, and accepted a parade of handshakes from Democrats. He embraced Sen. Mary Landrieu (D-La.), who he worked hard to win over last month for the first key test vote.


Senate Republican Jim Bunning of Kentucky was absent for the vote.


Obama has said he would be deeply involved in the negotiations – a contrast to his approach up to this point, involving himself only at key moments and frustrating Democrats who wanted more hands-on help from their leader as they took politically dicey votes.


“We hope to have a whole bunch of folks over here in the West Wing, and I’ll be rolling up my sleeves and spending some time before the full Congress even gets into session, because the American people need it now,” Obama told PBS Wednesday in an interview.


Reid accomplished what was long viewed as impossible: He drafted a comprehensive reform bill palatable to both extremes of his Democratic caucus, moderates and liberals, plus everybody in between.


The Senate plan falls far short of Democrats' initial vision for reform in one key regard — it lacks a government-run insurance option after several moderate Democrats said they’d block the bill if it remained. That decision has divided the Democratic base, with many liberals saying the plan isn’t true reform and would merely enrich private insurers.


But the past four days have still been heady for Democrats, who are well aware of their role in pushing health care reform farther than their predecessors. Reid, in particular, has been singled out repeatedly for praise.

“He is on the verge of achieving what majority leaders going back over a half a century have failed to accomplish,” Sen. Tom Harkin (D-Iowa), chairman of the Senate health committee, said. “Make no mistake, Majority Leader Reid has earned his place in the Senate's history.”


Senate Republicans gambled on Democrats becoming so utterly divided that they would be forced to scrap the bill.


Democrats did struggle to find consensus at every step of the process – during the painstaking committee-level negotiations in both chambers, and as Pelosi and Reid attempted to push the bills towards final passage.


But congressional Democrats always remained remarkably united on the need to finish the job. In the last month, as Senate Republicans threw up procedural hurdles and portrayed the bill as a dangerous experiment, Democrats emerged as a more cohesive unit than when the process began.

“Ultimately, every Democrat from the most liberal to the most conservative realized we had to get a bill, whether they wanted to do health care at the beginning or not,” Sen. Chuck Schumer (D-N.Y) said after Nelson, the last holdout, committed his vote last weekend. “Everybody realized there was just no option and nobody wanted to be the last person to bring it down.”


Republicans kept up their fight to the end. Sen. Chuck Grassley (R-Iowa), who was once viewed as a potential Republican supporter and spent months negotiating with Finance Committee Chairman Max Baucus (D-Mont.), said passing the bill would be worse than doing nothing.


“When the debate began last year, interested legislators of both parties set forth benchmarks that were no-brainers: Health care reform should lower the cost of premiums. It should reduce the deficit. It should bend the growth curve in health care the right way,” Grassley said. “The Reid bill doesn't do any of those things.”


“This vote is indeed historic,” Coburn said in a statement Thursday. “This Congress will be remembered for its arrogance, corruption and stupidity. … If this bill becomes law, future generations will rue this day and I will do everything in my power to work toward its repeal.”


Some of the toughest work remains ahead.


Senate Democrats concede that significant differences with the House – coupled with the fatigue caused by 25 consecutive days in session this month – will prevent delivering a final bill to Obama’s desk by the State of the Union speech.


“Let's be very honest about this, we need a break,” Majority Whip Dick Durbin (D-Ill.) said. “We need a break to get home to our families, to repair some relationships with our spouses, and to relax and recharge and come back. And I think we'll have a much more positive outcome after that break. But it does take time away in January. It may mean that this will take a little longer.”

And after a year of deadlines for action that came and went – the August recess, Columbus Day, Thanksgiving, the end of year – Durbin swore them off. “No. Nope. No deadlines. Boy, I have I learned that. I've announced three or four solemn deadlines during the course of this and had to eat my words every time so I'm finished with deadlines,” he said.


The two bills share the major goals of expanding coverage to millions of Americans and slowing the rapid growth in health care costs. But they differ in many ways, both large and small. Beyond the public option and abortion, the House and Senate bills are at odds over the taxes levied to pay for the overhaul, the mandate on employers to provide coverage, and the amount of subsidies for low- and moderate-income people to purchase coverage.

Democrats at both ends of Pennsylvania Avenue have been trying to ease the way for a smooth, politically painless negotiation between the House and Senate on a final bill. Few expect the public option to survive when the two bills are merged, but that didn't stop prominent liberals in the House from waging a last-ditch campaign to save it on the eve of Thursday's big vote.


"By eliminating the public option, the government program that could spark competition within the health insurance industry, the Senate has ended up with a bill that isn't worthy of its support," the always-candid Rules Committee Chairwoman Louise Slaughter wrote on CNN.com Wednesday.


On a conference call with her rank-and-file Wednesday, Speaker Nancy Pelosi (D-Calif.) reminded House Democrats, "We need to let the Senate work its will," according to someone on the call.


But she also appeared to remind them that she doesn’t plan to concede much ground during the conference negotiations.


"They have a good bill. We have a great bill," the speaker told her colleagues.


Pelosi walked House Democrats through the schedule for the negotiations, telling her members that the best-case scenario would have a bill on the president's desk at the end of January or the beginning of February. Hoping to pass the bill before Obama comes to the House for his first official State of the Union, the speaker said the White House has shown some flexibility to schedule the speech a little later than usual. Pelosi also warned her caucus that the Congressional Budget Office would need at least 12 days to deliver its final cost projection on whatever negotiators agree to.


House Democrats want to ensure the final package makes mandatory insurance more affordable. The House bill provides more extensive subsidies than the Senate legislation at the lower end of the income scale. Liberal Democrats would also like to see the final bill impose a greater burden on businesses to cover their employees.


On the call, a number of Democrats also asked the speaker to push for a mix of new taxes in the final bill. Some Democrats in the House want to see a combination of their surtax on the wealthiest Americans and the Senate's tax on high-end health care plans.»